All Collections
Your Dashboard
May 2, 2019 - Dashboard Upgrade

The biggest update ever to the way the User Experience Insight dashboard looks and works is now available at dashboard.capenetworks.com.

Major changes include; the ability to see if issues are affecting wireless and/or wired networks, as well as their severity. Sensor groups now support hierarchical organization so that administrators can group and monitor sensors in ways that are meaningful to them—for example, combine sensors at the region, campus, building, and floor levels.

Let’s dig into the improvements in this new version of the dashboard.

It's now even easier to understand user experience at a glance.

Less-is-More Focus on Applications and Services

The first thing you may notice is that there are now four main “traffic light” status indicators, instead of five. The Wi-Fi and Network indicators have been consolidated into a single indicator called Services. This indicator shows the status of your wireless and wired network services, including the Wi-Fi air interface, Ethernet (coming in a subsequent update), and the servers that provide DHCP, DNS, and Authentication. Combining all network services makes it easier to focus on what matters most: the services and applications that the organization and end users depend on. 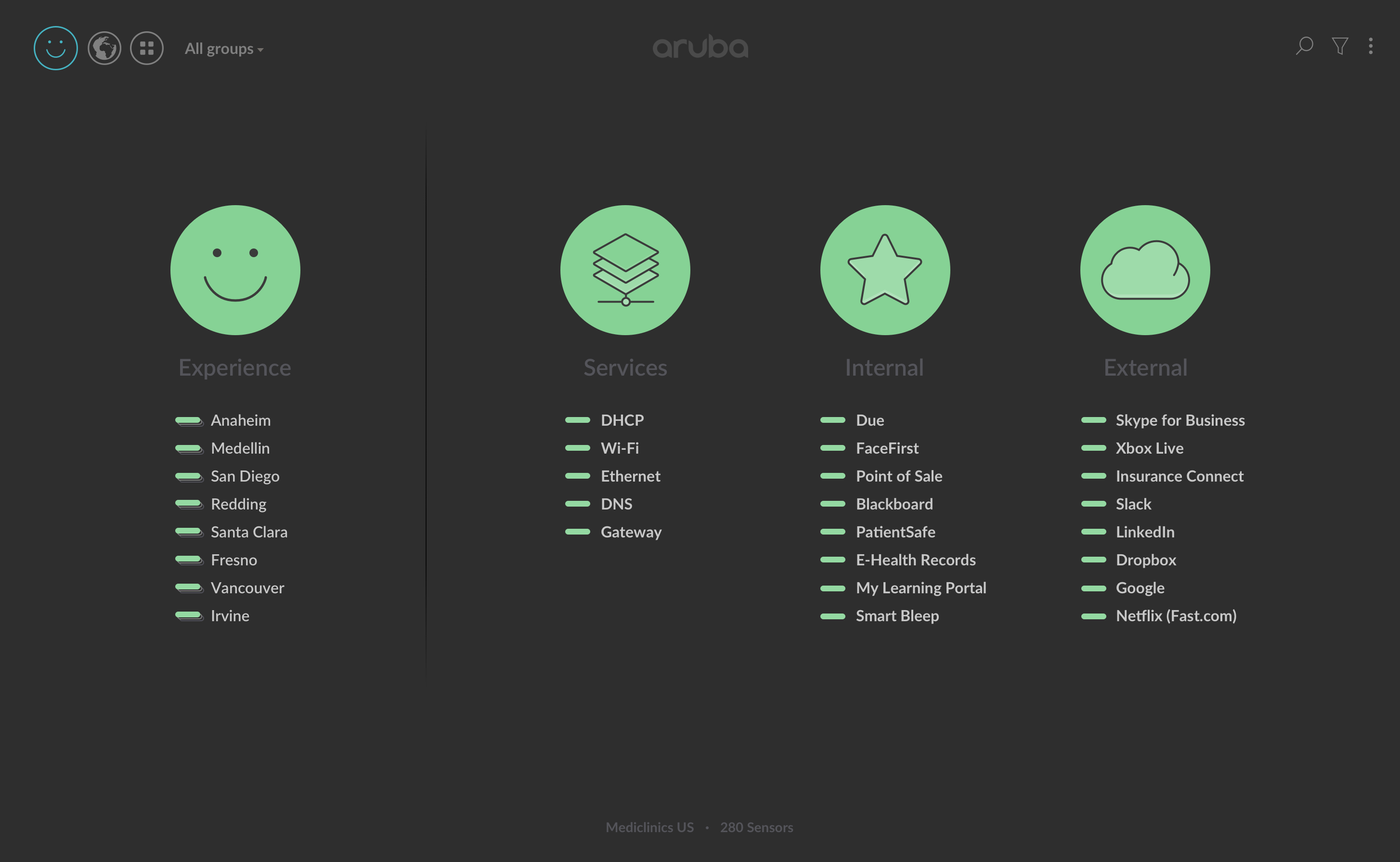 Status Strips appear to the left of groups, services, and applications and show the proportion of sensors that are affected by issues. This enables you to quickly identify and prioritize the most severe issues for resolution. Each status strip shows how many sensors have detected an issue and are in a particular visual state (green, yellow, or red). 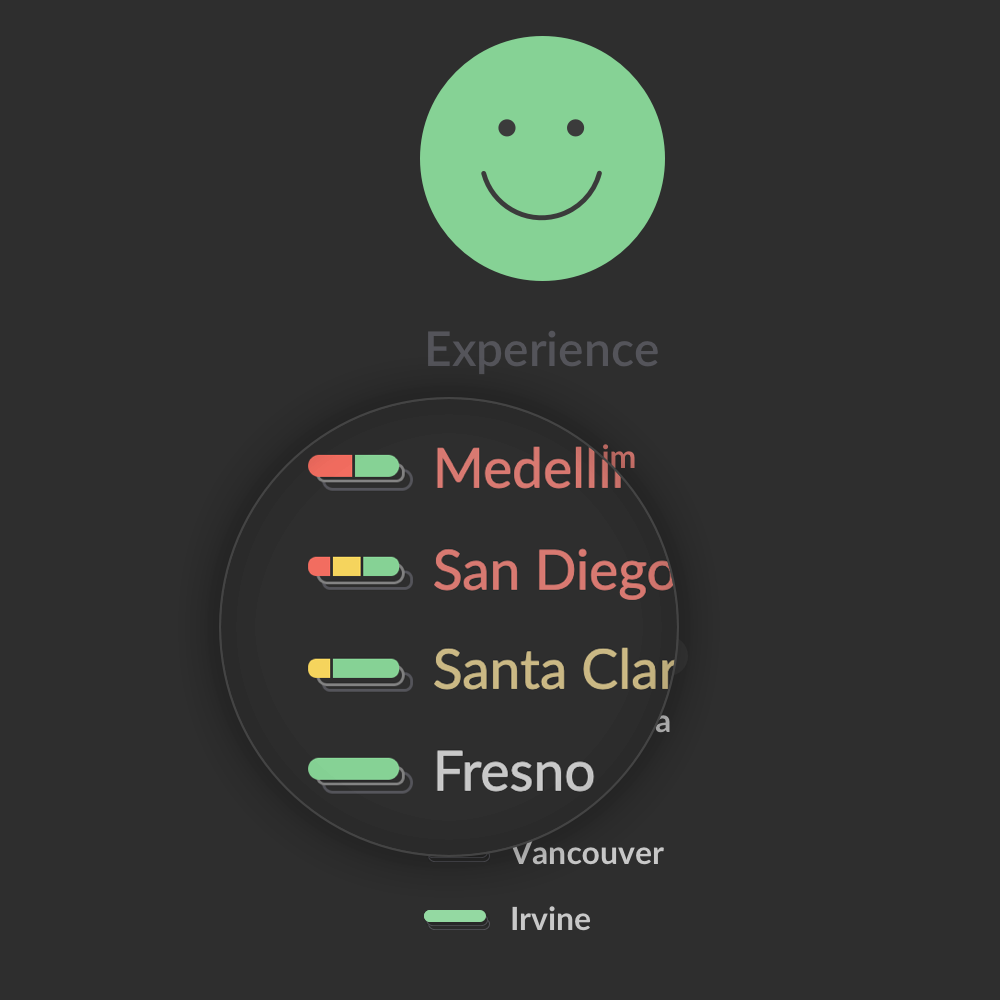 Status Strips show the relative severity of issues, or that everything is OK

Three new icons provide an at-a-glance indication of whether an issue or set of issues is related to the wireless network, the wired network, or power outages. 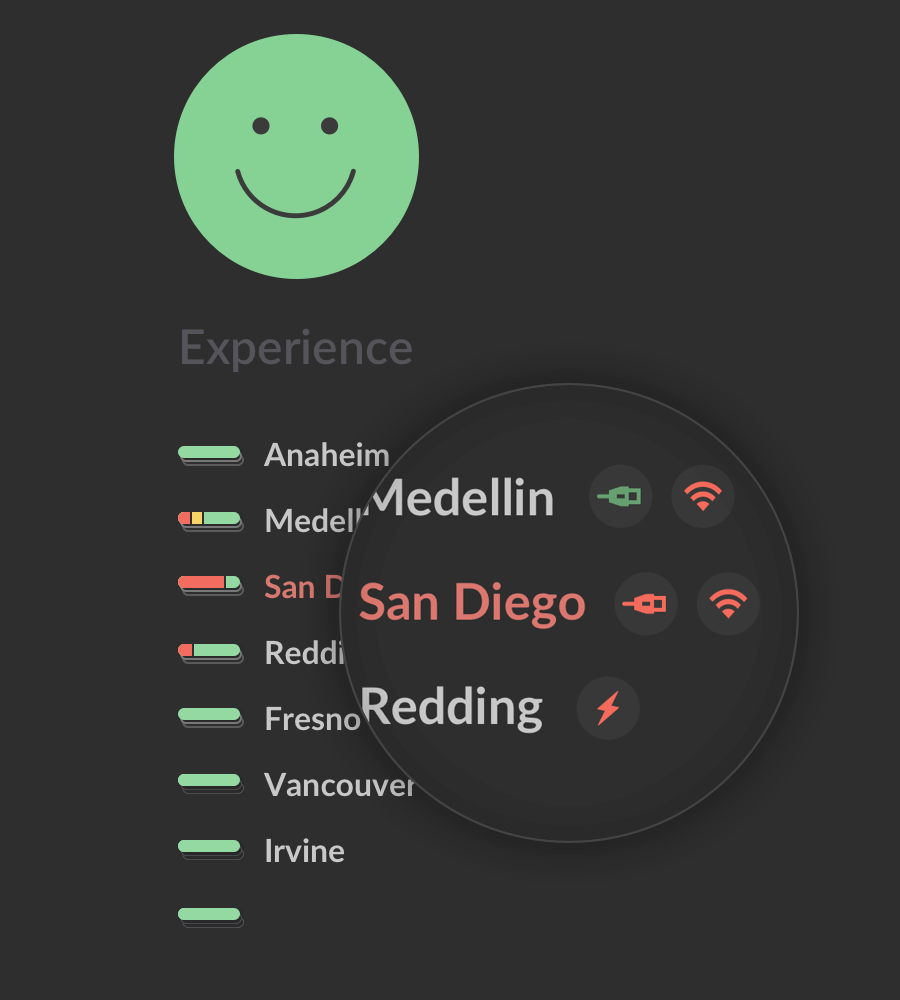 Wireless, wired, and power icons instantly show the sources and scope of an issue.

As an example, a sensor detects a DHCP issue on Ethernet, but not on Wi-Fi, which may be the case if different servers are used for the wired and wireless networks. In this case, the dashboard would present a small red wired icon and a green wireless icon next to the sensor affected in the Experience section and next to DHCP in the Services section.

Simplicity and Performance at Scale

The dashboard has been re-architected and upgraded to support customers with sensors at tens of thousands of sites.

“Live Filters” let you adjust what is displayed on the status dashboard so you can focus on what is important at any moment. Filter options include:

Selecting each filter item automatically and instantly updates the dashboard in the background—without needing to “apply” a selection—meaning you can see what you want to see faster and more intuitively.

Select the red status to show only sensors experiencing issues.

Sensors can be combined into hierarchical groups up to seven levels deep. This makes it easier to manage large complex deployments of sensors, especially if they are campuses or geographically distributed.

You can quickly know the composition of the sensor group and a high-level of the status by hovering over a group in the Experience section (main dashboard view) that will pop up a display with these details:

You can click on a sensor group to drill-down to see its sub-groups. The group level indicator on the upper left of the dashboard shows the level being displayed. You can continue to drill down until you reach the last level, containing only sensors. As with the previous dashboard, clicking on an individual sensor takes you to it’s drill-down page.

The new group level indicator on the upper left of the dashboard is also a control that you can use to quickly jump to a specific sensor group and nesting level. Above that, an interactive “breadcrumb” shows how many levels deep you are in the hierarchy; clicking on a group in the breadcrumb navigates directly to that group. 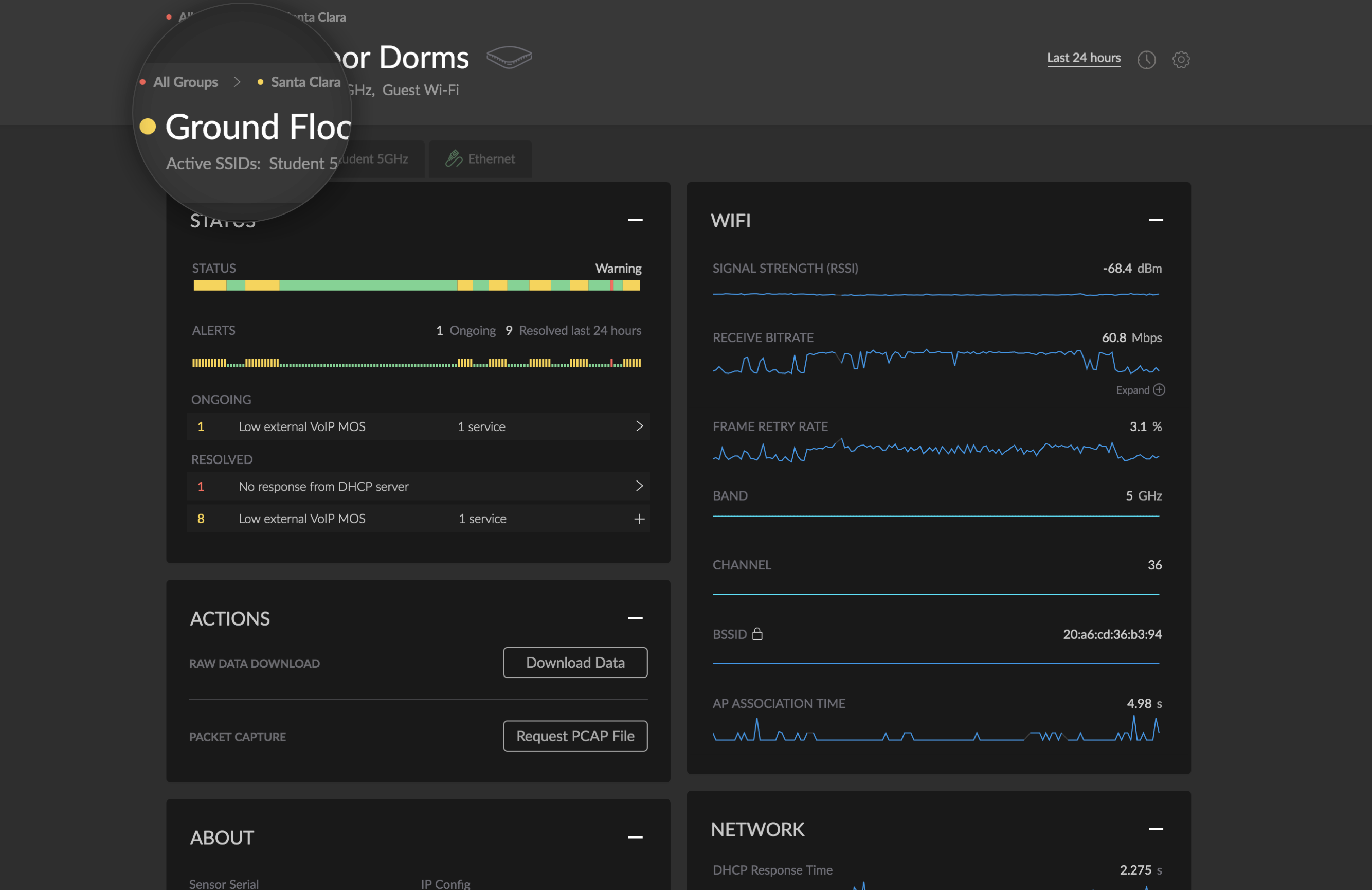 Navigation menu and breadcrumb enable you to jump to any group or sub-group.

Multiple improvements under the hood ensure that the user interface is responsive. The dashboard loads and responds >20X faster for deployments larger than five hundred sensors. The new architecture means the dashboard can support tens of thousands of sensors, making it ideal for large, distributed networks.

There are multiple usability improvements and tweaks to existing features to save you time and effort. 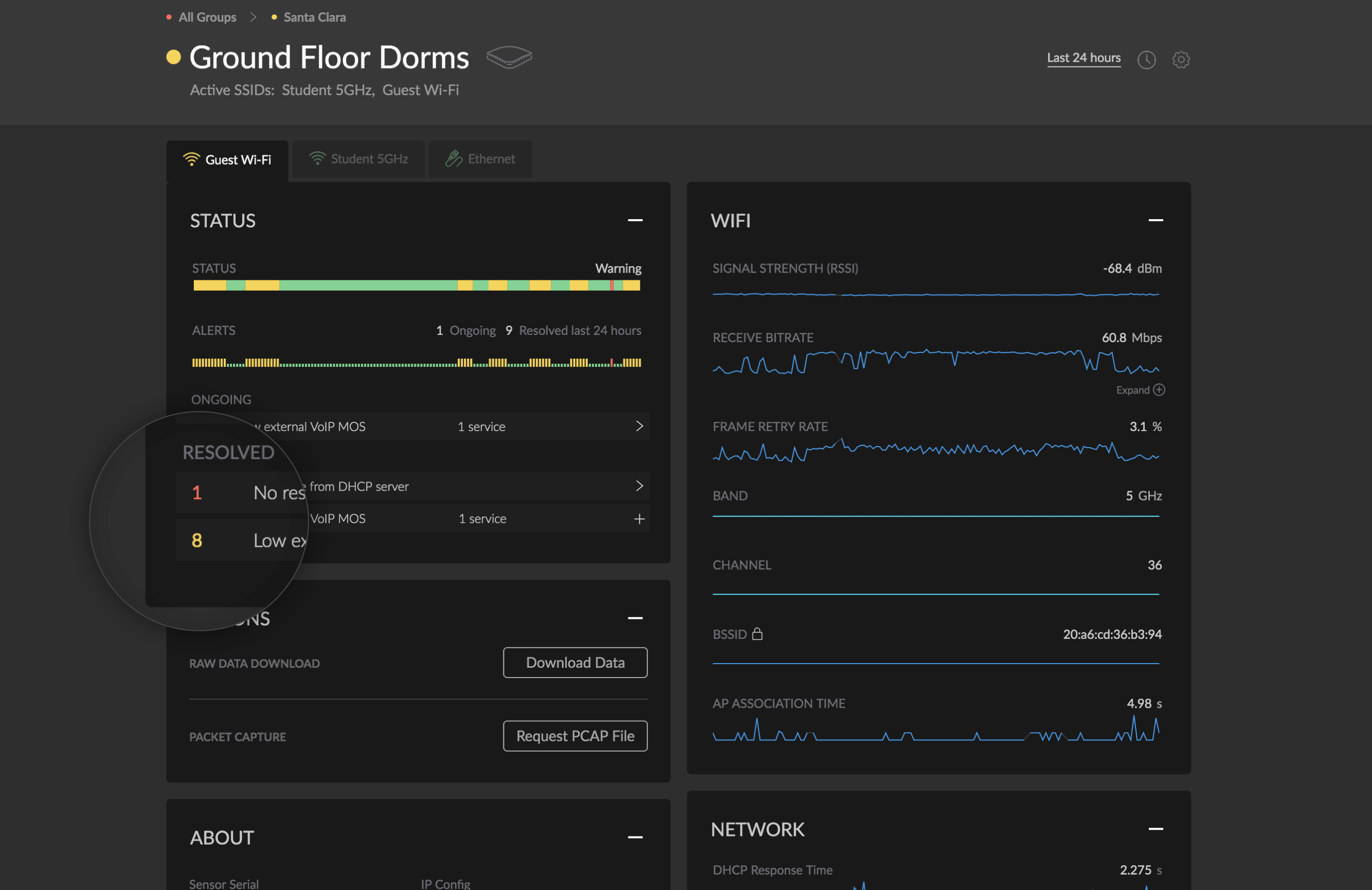 Charts now display an interpolation segment that connects data across test cycles so you can see trends significantly easier. This is particularly useful when a single sensor is testing multiple SSIDs, which can cause gaps in testing on each SSID. 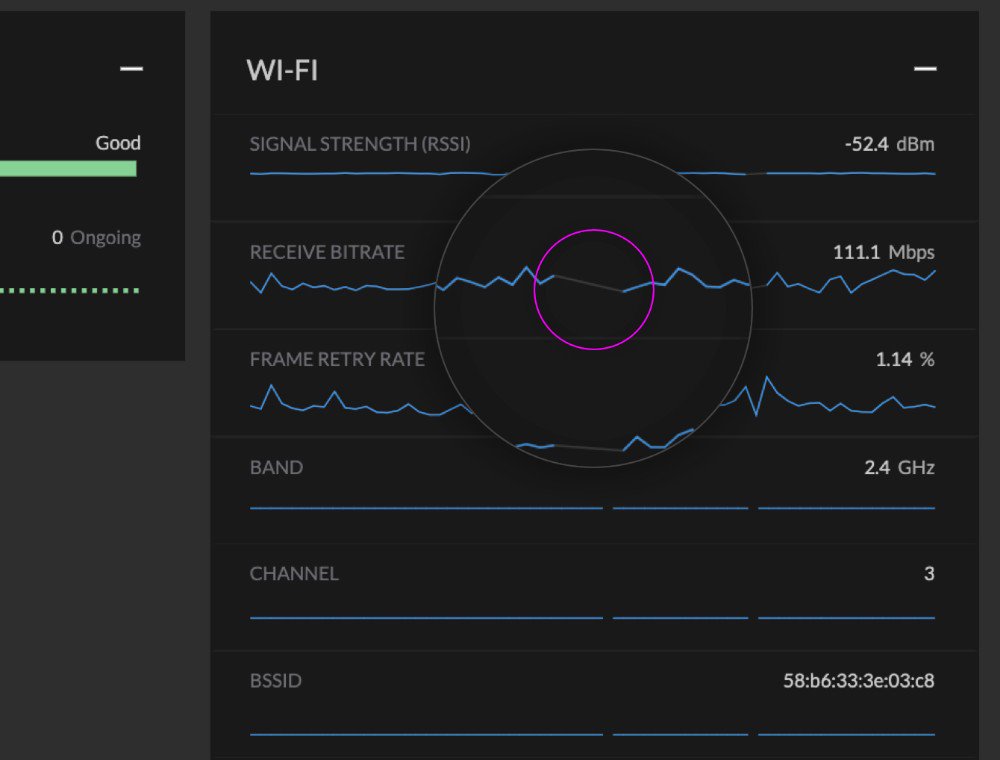 *Note that this feature is a visual aid only—charts do not provide interpolated data.

In the map view, sensors are automatically clustered into geographical groups depending on the zoom level. When zoomed out, nearby sensors (e.g., at a campus) will be combined into a single pin or cluster of pins on the map. If there are sensors with different states—e.g. several red sensors and several green sensors—the cluster will include a red pin and green pin, with numbers on each pin showing the respective number of sensors in each state. Clicking on a cluster zooms in to show only the sensors in that cluster. 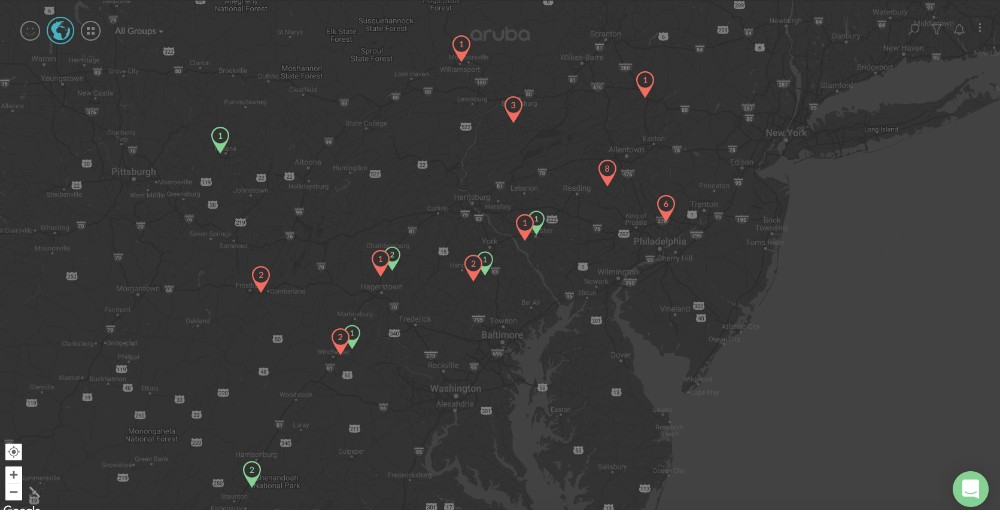 Sensor clusters show how many sensors are in each state: green, yellow, and red.

Get Started here
Did this answer your question?