All Collections
FAQs and Troubleshooting
FAQ's

Our FAQ's are continuously in process. Anything you would like to have added? Please contact: support@capenetworks.com Thank you!

Written by sabine
Updated over a week ago

How do I add sensors to my dashboard after initial onboarding?

When I configure ethernet monitoring on a sensor, which network is the sensor using to connect to the cloud?
The sensor tries ethernet > wifi > mobile, in that order, and will use the first online one.

How does the Sensor learns its location and then shows it on map?
We use Google's BSSID geolocation service with data we collect from sensor Wi-Fi scans.
Please reference to below links for more details:
https://en.wikipedia.org/wiki/Wi-Fi_positioning_system
https://www.lifewire.com/wifi-positioning-system-1683343

What does "NA" mean in dashboard?
In the dashboard WiFi screen of the SSID " Nurse-WiFi ", Channel Utilisation, Band, Channel, BSSID & Association time shows as "NA" for few minutes as shown in the screenshot. this is usually caused by a slow down of the test cycle due to the fact that there is an issue (or many issues in this case) which the sensor needs to triage. If there are issues then the sensor goes through a process of confirming that there is an issue and running multiple steps to give further insight into the issue. This can take some time and if there are many issues will cause actual testing to slow down substantially. So during those periods of no data, the sensor was doing analysis on the issues. If the issues are fixed on the network then the sensor should go back to normal operation. 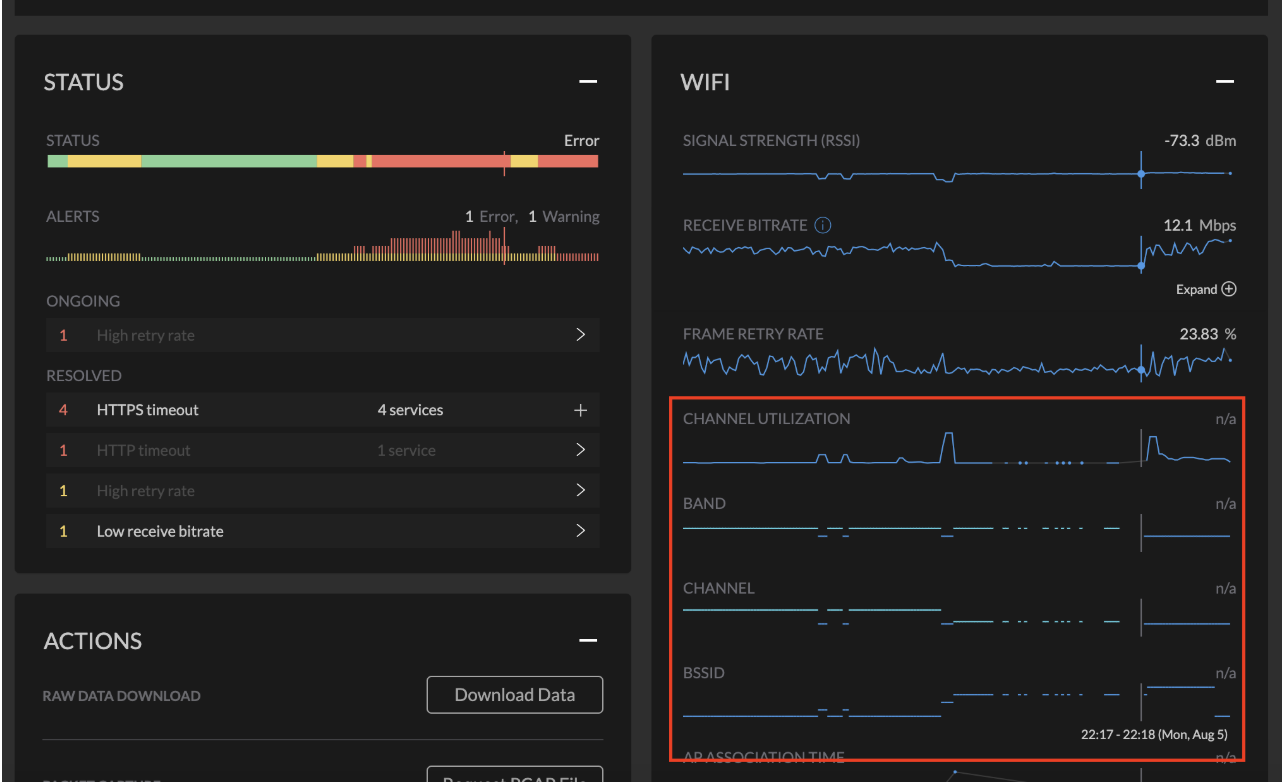 My sensor is connected to wireless but not updating status on the cape portal website, why?
If sensor details on the dashboard are reporting the error "WiFi association failed" and it is locked to a BSSID which is not present in the sensor's vicinity, you need to "unlock".
To unlock please navigate to the main dashboard page > then navigate to the 3 dots on the top right hand corner of the screen > Settings > Sensors > click on the edit option > next to the SSID > click on configure and remove the locking.

UXI sensor tests WiFi association every 5 minutes but can we configure to keep it to connect WiFi? This test configuration seems not to be configured.
That is right. The core network test timings are not configurable. The sensor associates to a Wi-Fi SSID, conducts the core network tests serially (DHCP, DNS etc.) and then moves on to conducting internal and external application tests. Once this is done, the sensor disconnects and moves on to the next SSID. Hence, the time taken to test each SSID is roughly 5 minutes but highly depends on the number of applications it is testing and is not configurable from the dashboard.

Is there any possibility to map SSIDs to sensor in bulk? One of my prospect customers is evaluating the sensor right now and they are thinking about deployment for maybe hundreds of branches.
On the dashboard, that's the only way to do it today. But there is an alternative route you can take for customers who have hundreds of sensors. You could open a support chat case to create dashboard hierarchies. As part of this process, support will give the customer an excel sheet to create the desired hierarchies and the relative SSID settings as applied to these hierarchies. You may skip the multi-level groups and not create any hierarchies (if thats what the customer wants) and just fill in the SSID column on a group basis. That would help configure sensors in bulk. https://help.capenetworks.com/en/articles/3134346-onboarding-sensor-grouping-3

Laptops vs phones vs IOT devices all have different quality of antennas and power outputs. Do you think the Cape Sensor is comparable to the average laptop regarding the antenna quality and power or would it be more like an iphone? The reason I need to know is because the Cape graphs may look much better than what the average iphone user would experience in the same location.
The sensor is designed specifically towards the performance of a client device. There is no extra power, and it is not more sensitive than a client. The device should represent a phones performance fairly well in so far as RF characteristics are to do this we limited the receive sensitivity, and specifically did not use custom designed antennas.

How do I get a new user account started?
You can contact any admin user of that account or contact support to add that user into the account, it will take up to 24 hours. Support has to raise the request to backend team to get this done. https://help.capenetworks.com/en/articles/1954369-adding-or-editing-users

Can I have multiple e-mail accounts in the "Alert e-mail address" field on the Alerts banner?
Each user needs to login to his/her dashboard and enable/disable the Reports ( Weekly Network Report ), Subscribe to Alerts, timezone of alerts based on their requirement.

Can I see why the sensor is choosing a dedicated AP to connect to?
The sensor is a Linux client and acts like one. So when it would generally connect to the best available BSSID. This does not necessarily mean strongest signal strength. But could be a combination of various RF metrics. Unless you lock the sensor to a specific BSSID, the BSSID selection is a function of the Linux driver rather than that of device software. It will connect to whichever AP responds to the probe.

Is there anyway to run a report when you see errors reported-to be able to capture and review them? I'd like to run a report or gather data when i see an error or alert reported.
If the error occurs, the issue will be captured and will be displayed on the dashboard, even after the issue is resolved. We can enable the packet capture on the sensor, so that the packet information will be captured. We can enable the weekly reports by going to Settings>>Alerts which will provide the weekly data collected from the sensor.

Can the sensor monitor its power inlet, in case it is connected to both DC and PoE?
The sensor should never be plugged into two sources at the same time. The DC will be used in your case but the PoE circuit will keep switching on and off, which is why we don't allow users to use both power sources. When connected to a single source, the sensor has a power back up using super capacitors for up to 45 seconds in which it phones home and informs that back end of the power loss. This creates an error on the dashboard which says “power outage detected” as opposed to generating a connectivity error.

Can tests be assigned to each group?
Yes, there is a help document on this topic here - https://help.capenetworks.com/en/articles/3404387-selecting-groups-and-networks-while-configuring-tests

Can UXI export test result data in CSV format?
Yes, you can download CSV file with test result and it will be forward to your email.
Select any sensor from the main dashboard and under all resolved and ongoing alerts you will find "Download Data" box.

Does the sensor support Wi-Fi6?

The current G6 series sensors do support Wi-Fi6. For more information, you can refer to this link.

Is it true that the ZAP test can be done only if the customer has a Iphone or an Ipad? and after they have installed a ZAP application there in the mobile or Ipad ?
The ZAP test is between the sensor and a compatible Ruckus access point, I believe the IoS/Android ZAP app performs the same actions as the UXI sensor, so the test IS NOT between the UXI sensor and a mobile phone / table. In order to configure a target / endpoint for the AP being tested must be a Ruckus access point.

Customer's main requirement is to initiate a packet from wired VLAN to UDP port number. Is this possible or not? Can they test UDP ports in custom test?

At the time of writing we do not have a UDP specific test, we have the generic test template which performs TCP and ICMP pings against a target but no UDP port tests. This can be requested as a use case here.

Note: There isn't a minimum required wireless network to be configured, you can configure the sensor to ONLY test wired networks and you only need to configure a single wired network. That functionality is supported.

Regarding the time taken per test, most tests if they involve a ping generate 30 packets and run for approximately 30 seconds. Obviously the start of the test cycle involves a connection to the network which could include authentication (802.1x or otherwise), thereafter a DHCP request is performed. Next a gateway connectivity test and cloud connectivity test are executed. If any of the above FAIL then there are a number of steps taken by the sensor to gather details around the context of the failure, this process is called the triage steps and they can take up to 60s per test. This roughly covers the "core" test cases. The user configured internal and external tests are mostly accessbility tests which entail pings, connectivity, reachability and HTTP/S tests. They typically take around 10s-30s to successfully execute, but obviously failure cases take longer.

Note: The download tests can be configured to execute for a specific time period. If the customer can describe why they are concerned about test execution times perhaps I can offer some more information which is specific to their requirements.

All the "core" tests typically get completed in the order of 40s or so.